Cherishing Every Life from Beginning to End

Reasons to Be Pro-Choice?

Recently, NY Times columnist & Catholic Ross Douthat wrote about ‘abortion extremists’ among his liberal friends. Abortion supporters responded in letters to the editor (NYT, 4/15/18). Some of their key points are paraphrased here together with a Catholic response by your editor.

Outgoing Planned Parenthood (PP) President Cecile Richards just published a book detailing her lifetime of pro-choice activism. The book claims pro-abortionists are “transforming the culture” so they can “quit apologizing for abortion.” 3,547,123 is the number of abortions committed at PP since 2006 when Richards became its president. Ten years of public opinion research shows that Americans consistently support significant restrictions on abortion. This year’s Marist poll on abortion found that more than 75% of Americans would limit abortion to — at most — the first three months of pregnancy. A majority of Americans (56%) said they believe abortion is morally wrong. Love is winning! 52% of respondents, and 52% of women, said having an abortion will more likely cause harm to a woman’s life than good. Likewise, 78% said that our laws can protect both the well-being of women and the lives of the unborn rather than choose between them. The poll makes clear that much of what Planned Parenthood advocates falls far out of the mainstream. For example, 63% of Americans support banning abortion after 20 weeks of pregnancy unless the mother’s life is at risk, while just 33% oppose such a ban. Most Americans also oppose the use of taxpayer dollars to pay for elective abortion procedures – another position PP embraces that places them in a minority. In truth, there is a consensus in our culture on abortion: Americans support major rollbacks on abortion. That’s because the pro-life movement is winning hearts and minds on this issue. [March for Life President Jeanne Mancini on Fox News, 4/3/18]

beyond crass … almost beyond belief. 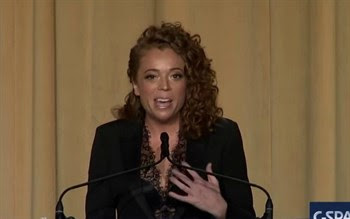 Yet in the midst of a vulgar, over-the-top ‘comedy’ routine at the annual White House correspondents’ dinner, Michelle Wolf (right) decided to joke about abortion.

This was beyond tasteless. Beyond crass. It almost beyond belief.

Speaking of Vice President Pence, she said that he is ‘very anti-choice. He thinks abortion is murder, which, first of all, don’t knock it ’til you try it – and when you do try it, really knock it. You know, you’ve got to get that baby out of there. And yeah, sure, you can groan all you want. I know a lot of you are very anti-abortion. You know, unless it’s the one you got for your secret mistress.’

Perhaps Wolf was right to raise the issue of hypocrisy. There have been conservative politicians who allegedly urged their mistress to have an abortion. Perhaps some corrupt preachers have done the same.

But to joke about abortion itself. To joke about using violent means to dislodge a little baby from its mother’s womb – how does one respond to this? To repeat her words: ‘when you do try it, really knock it. You know, you’ve got to get that baby out of there.’

How would we respond if she decided to joke about the Holocaust? ‘You better get those ovens super hot! There are a whole lot of Jewish bodies to burn!’

How would we respond if she decided to joke about slavery? ‘How many Africans can you cram into the belly of a ship? Don’t worry about overcrowding. You can toss the extras overboard!’

How would we respond if she decided to joke about human trafficking? “You know why selling people is so much better than selling drugs? You can only sell drugs once.”

We would be horrified with such ‘jokes.’ From the left to the right, we would say, ‘Off limits! There’s nothing to laugh about here.’

And anyone who was idiotic enough to crack such ‘jokes’ would be universally panned, if not banned.

Why, then, is it OK to joke about abortion? About a decision that is terribly painful for many mothers to make. About a gruesome procedure that slices up or burns up or sucks out a helpless human being from the sanctuary of its mother’s belly.

Wolf has been rightly criticized for her savage attack on Press Secretary Sarah Huckabee Sanders. But Ben Shapiro was correct to tweet: ‘The worst part of Michelle Wolf’s garbage performance last night wasn’t her nasty riff on Huckabee Sanders. It was that dumpster fire abortion joke. But few were as offended by her literally celebrating baby killing as they were by her knocking eye shadow.’

Personally, I would love to see the day when Michelle Wolf becomes a passionate pro-life ally. She wouldn’t be the first to make a radical turn.

But for the moment, what we have is shame and woe. Shame for aborting more than 55 million babies. Disgrace for mocking their agony.”