These key pro-life groups are led by women: 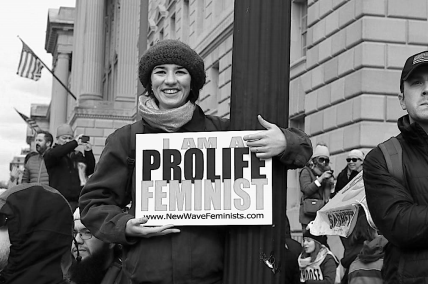 Also noteworthy among women leaders are the late Phyllis Schlafly, founder of the Eagle Forum, and the late Dr. Mildred Jefferson who was the first black woman to graduate from Harvard Medical School, prominent prolife physician and activist, and the co-founder of the NRLC. Yet another leading figure in the pro-life movement is Dr. Alveda King, niece of the Dr. Martin Luther King. She works with Priests for Life to educate the public on how Planned Parenthood targets the black community.

Some Call it ‘Black Genocide’

Some Christian leaders like Pastor Clenard Childress say: “The most dangerous place for an African-American is in the womb.” They believe that Planned Parenthood targets elimination of babies in the minority community by placing a greater proportion of their facilities in those communities. This has echoes of the eugenics movement of past centuries. An engaging historical documentary on racism and abortion may be found at www.MAAFA21.com or Black Genocide in the 21st Century.

Rev. Childress is director of LEARN Northeast which, in February of 2015, together with the Center For Bio Ethical Reform launched the “All Black Life Matters” project that has proven to be extremely effective in opening the eyes of the public to the evils of abortion. The group’s website www.BlackGenocide.org contains numerous informational & educational resources.

Archbishop: Catholic Politicians Voting on Abortion Up to Birth are “On a Path to Hell”

Catholic Archbishop Joseph F. Naumann, chair of the U.S. Conference of Catholic Bishops Commit- tee on Pro-Life Activities and archbishop of Kansas City, KS, said those who refuse to repent for sup- porting the killing of babies are putting themselves in mortal danger. “While we can object to the actions of these public officials, we are not able to judge their souls. At the same time, we know there will be a Judgment Day,” he said in a statement last week. “Conscious and unrepentant mortal sin endangers our eternal souls and places ourselves on a path to Hell.”

Naumann said he felt compelled to condemn their actions so that other Catholics are not misled or confused. “Recent efforts to perpetuate and expand abortion in state laws have illuminated the deplorable actions of some Catholic public officials and advocates,” the archbishop said. “Their efforts to support and even celebrate such legislation will result in killing many more unborn children, as well as the spiritual and emotional wounding of their mothers and fathers. Advocating for intrinsically evil acts, like abortion, is a serious immoral act,” Naumann said. He also indicated that these so-called Catholic politicians may be denied communion if they continue to support the killing of unborn babies.

For example, a nominal Catholic New York Governor has enthusiastically signed a law that allows unborn babies to be aborted for any reason up to 24 weeks and up to birth for “health” reasons, a broad category that includes basically anything. It redefines a “person” as “a human being who has been born and is alive,” and describes abortion as a “fundamental right.” The law also removes state protections for infants born alive in botched abortions. The Catholic Church teaches that every human life is valuable from conception to natural death, and abortion, infanticide, euthanasia and other life-destroying practices are evil. [Micaiah Bilger, LifeNews.com, 3/1/19]

“No one becomes a Christian by his own unaided power. The process begins only when a person rejects the illusion of independency and self sufficiency. We must acknowledge that it is God Himself who must act in us, who must lead us to our true selves.” Pope Emeritus Benedict XVI

What do you do when you don’t like a factual version of history? You come up with made-up feminist ‘herstory.’ In an essay, Ryan Bomberger says a key figure in Roe v. Wade would be Jane Roe herself, the late Norma McCorvey. She’s nonexistent in a movie that wouldn’t exist without her historic role. Norma never aborted her child but made a loving plan of adoption instead. She became pro-life, devoting the rest of her years to aborting the Roe decision.

In one of the film’s massive omissions on the history of abortion in America, the Catholic Church is completely missing. There would be no prolife movement without Catholics, and their fight began long before Roe. It’s why eugenicist/ socialist Margaret Sanger repeatedly vilified Catholics, as evidenced in her alarmingly anti-human 1922 book, The Pivot of Civilization.

Netflix offers free “educational screenings” in classrooms for their propaganda, calling its completely imbalanced film “essential viewing.” Notre Dame Univ. signed on and held an event recently, accusing the prolife movement of – get this – white supremacy. Yet, the slaughter of over 62 million human lives since Roe, nearly one million a year, is disproportionately black. Rabidly pro-abortion Notre Dame professors calling pro-lifers ‘racists’ for tireless efforts to protect mothers and their unborn children, regardless of race or ethnicity, is truly Just. Fake. News. It’s bizarre to see them defend a violent institution actually birthed in eugenic racism and elitism.

Bomberger says: “I’m a black adoptee and adoptive father, yet would be called a ‘racist’ for fighting abortion. More black babies have been aborted than born alive in New York City where eugenic pseudo-science spawned Planned Parenthood. Actual & fatal violence against black lives happens 247 times a day inside the nation’s largest abortion chain. The only thing that reigns supreme in “Reversing Roe” is deception. There are so many lies in this misinfomercial that it’d take another documentary to highlight them.” [2/26/91:“Reversing Roe” on Netflix: The Pro-Abortion Crockumentary of the Century” www.LifeNews.com]

“The basis for determining the value of work is not primarily the kind of work being done but the fact that the one doing the work is human. It is on this principle that the work of man – whether it be physical or intellectual – finds its value in the dignity of man.” St. John Paul II

Why do the unborn have property & inheritance rights but not the right to life? Why do the unborn have a right to medical care, but not the right to live? Why do federal and state laws prohibit a death sentence from being carried out upon a pregnant woman? Every other area of law assumes the human rights of the unborn as a person, as a human: homicide, property, inheritance, medical malpractice, pre-term medical care and many others.

But for abortion, why is the mother’s desire the determining factor? How can one person’s feelings determine the rights & value of another person? Why can an abortionist kill an unborn baby with mom’s consent, but no one else can?

These questions are unanswered by abortion advocates. The silence is deafening – and deadly. [Matt Britton, Esq, Day 41, 40DaysforLife.com, 2019]

New York abortion law permits abortions up to the moment of birth, and allows non-physicians to perform them. Yet Ohio, Louisiana, North Dakota and Indiana have anti-discrimination laws prohibiting eugenic abortions of children with Down syndrome and other disabilities. Similar laws are in the works in other states. Much has been written about political polarization. In the cause of life, the moral stakes are now clearer than ever. [First Things, 3/19]

That’s the title of a new book by the late Robert Lockwood (OSVCatholicBookstore.com) who asks: “What the hell am I doing with my life?” In the end, you just want to be happy. Not three-beer happy, I- got-a-raise happy, or the Steelers-made-the-playoffs happy, but that quiet contentment that comes with living a good life. Lockwood says that by developing some holy habits, and with the sacraments, a life of virtue and happiness really is possible.

In September, the American Journal of Epidemiology published a Harvard study of more than 5,000 youths revealing the link between religious upbringing and better health and well-being. “Compared with no attendance, at least weekly attendance of religious services was associated with greater life satisfaction” and several other positive outcomes.

Those who prayed daily in their youth reported greater life satisfaction and positivity in their 20s. Following these same religious youth years later, the study found them less likely to have depressive symptoms, smoke, use illicit drugs, or have a sexually transmitted infection. [Family Research Council, Washington Impact Report, 2/2019]

Edited since 2005 by Frank Tinari, Ph.D who is on the LEC Board of Trustees. Past issues posted on the NJ Diocese of Paterson website. To have your parish receive this newsletter each month free of charge, email your request to the editor, tinarifr@shu.edu