“The Extraordinary Ability to Deceive”

… is why, for over a half century, the so-called ‘pro-choice’ movement has thrived in hiding what it’s really about, the willful taking of innocent human lives in abortion. Legislators in thrall to Big Abortion dollars vie to keep sidewalk counselors away from abortuaries, in order to maintain the pretense that what goes on inside those chop-shops [what they call “reproductive health clinics”] involves no more than unwanted “tissue.” 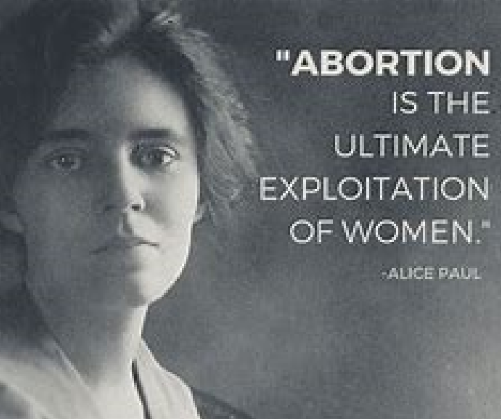 The governor of New York celebrates a new law that legally permits abortion up to the moment of birth because this is all a matter of “women’s reproductive health.” The governor of Virginia babbles about letting children who survive abortions die, thinking himself humane because he insists that the victims will be kept comfortable.

What Big Abortion, its ideological allies, and its political facilitators fear most of all is the truth – the truth that strips away the rhetorical facade behind which the campaign for “liberalized” abortion laws has been conducted since the late 1960s. The tens of millions of lives lost to the abortion license in America since Roe v. Wade–lives that might have been creatively lived–scars the national conscience, and women who have chosen abortion, whatever the euphemisms that put Band-Aids over the scars. Healing for women, and effective service to those in crisis pregnancies, must always complement argument and witness in pro-life activism. And men should be required to watch movies like Unplanned. Men have benefitted far too long from Big Abortion and its wicked language games. [George Weigel, Truth-telling & big abortion, The Beacon, 5/30/19]

Why Legally Compel Christians to Cooperate with Sinful Behavior?

Religiously observant people today have very little power to ‘persecute’ others. On the other hand, proponents of the sexual revolution and those of a secular mind-set aligned with the state are quite willing to use the punitive force of the law.

In America and throughout the world, Christian believers are being hauled into courts and legally threatened. Christian bakers and photographers in the wedding industry are being sued repeatedly. Food chains & other Christian marketers are being sidelined publicly because they do not support the recent notion of the same-sex “marriage.” The Little Sisters of the Poor are back in court for the fifth time, and Catholic pharmacists are being decertified because they will not supply contraceptives or abortifacient drugs. Catholic Charities is being excluded from obtaining government contracts for adoption services because the Church favors married heterosexual couples over single parents or same-sex couples. Christians also legally are being forbidden from public prayer & displays of their faith.

The Church and other Christian-based groups have no similar legal powers to impose their views. The imposition of views is dominated by those rooted in the sexual revolution. Why not accept that many of us withhold approval from the sexual revo- lution for sincerely held religious beliefs? [Msgr. Charles Pope, Pastoral Answers, Our Sunday Visitor, 6/16/19]

Hollywood contributes mightily to one of the root causes of abortion: promiscuity. The kind of graphic sexual fare in Hollywood films, eroticizing the culture for decades, helps to create an environ- ent where men & women are more likely to abandon restraint. Hollywood’s denial of any cause & effect doesn’t work. Why did Hollywood decide long ago not to feature smoking in movies? Because it didn’t want to create an environment that induced young people to smoke. They can’t have it both ways.

In 2007, Disney said it would place an anti- smoking public service announcement on DVDs of any future film that depicts smoking. Hollywood launched an educational anti-smoking campaign. Imagine if it stopped making as many sexually saturated movies, & decided to launch an educa- tional anti-promiscuity campaign? That might lead to behavioral changes such as a decrease in sexual recklessness, which in turn might lessen the need for abortions. But Hollywood doesn’t have the will to do any such thing. [Bill Donohue, The Catholic League, 6/13/19]

Margaret Sanger, feminist icon and founder of Planned Parenthood, opposed abortion but thought birth control – including forced sterilization – should be used to prevent “unfit” people from reproducing. She was especially concerned about black people having children. She campaigned for birth control in black communities and set up a clinic in Harlem in 1930. In contrast, today’s pro-abortion advocates argue simply for “reproductive rights.”

Criticizing his fellow justices’ decision to block part of an Indiana law that banned abortion based on sex, race or disability, Clarence Thomas pointed out how, in practice, abortion acts in racist & eugenic ways. In practice, technology like genetic screening still has a “solve poverty by cutting birthrates” bias, and abortion-rights rhetoric easily slides into fears about “too many poor kids in foster care.” In practice, Planned Parenthood clinics are in the abortion, not the adoption, business, and create a disparate impact of abortion on black birthrates. [Ross Douthat, New York Times, 6/2/19]

Eight decades after Sanger set up her clinic in Harlem, Justice Thomas writes, “there are areas of NYC in which black children are more likely to be aborted than they are to be born alive–and are up to eight times more likely to be aborted than white children in the same area.” Pro-choice advocates cite black poverty and discrimination to explain high black abortion rates, but other low- income minorities such as Hispanics terminate pregnancies at far lower rates than blacks. [Jason L. Riley, Wall Street Journal, 6/5/119]

By the late 1960s there were expectations that the Catholic Church would fall in line with the culture & give approval for contraceptive usage. Proponents claimed it would reduce abortions to nearly zero–every child would be a “wanted child.” Divorce would drop because couples could have more sex without pregnancy worries. And the dignity of women would be enhanced, no longer being “slaves” to their bodies.

In 1968, Pope Paul VI declined to change the Church’s teaching and, instead, predicted the opposite outcomes. He said abortions would increase as would divorce, and the dignity of women would diminish, because they would be seen as sexual objects, not as wives and mothers. Since then, widespread contraception use has ushered in promiscuity and the lie of “sex without consequences.” Both abortion and divorce have skyrocketed, as have sexually transmitted diseases, teen pregnancy, single motherhood, absent and irresponsible fathers, the breakdown of families. There is also a pornification of our culture that helps spread sexual confusion.

When sex no longer is about having children and thus belongs in stable, traditional marriage, then it becomes only about self-satisfaction, and people engage in harmful, unhealthy & self-destructive practices. Children either are aborted or they survive in a confusing world of absent fathers and broken families. Much of this dysfunction can be tied to the promiscuity that contraception has helped promote. For example, condoms are not even close to 100% effective, and they increase the very behavior that causes individual and family dysfunction.

Through contraception we have separated what God has joined (sex, marriage and having children) and we are reaping the whirlwind. The only “safe sex” is within a monogamous, faithful marriage. [Msgr. Charles Pope, Our Sunday Visitor, 6/2/19]

A Call for Responsible Fatherhood

Pathologies and moral crises of our era do not stand in isolation. The intersecting layers of family life, human sexual behavior, public policy, and the well-being of children are all entwined. Fatherhood is a theme that weaves throughout them with compel- ling frequency. Fatherlessness is one of the most important, albeit ignored, social issues of our time.

“Fathers have a direct impact on the well-being of their children … Girls with involved, respectful fathers see how they should expect men to treat them & are less likely to become involved in violent or unhealthy relationships,” states a report published by the U.S. Department of Health & Human Services’ Adminis- tration for Children and Families [Jeffrey Rosenberg & W. Bradford Wilcox, “The Importance of Fathers in the Healthy Development of Children,” 2006] Sadly, “children who live in fatherless homes often face higher risks of physical abuse, sexual abuse, and neglect than children who live with their fathers.”

According to a study conducted by the Journal of the Human Behavior and Evolution Society, “Women whose parents separated between birth & six years old experienced … more than four times the risk of early sexual intercourse, & two and a half times higher risk of early pregnancy when compared to women in intact families. The longer a woman lived with both parents, the lower her risk of early reproductive development. Women who experienced three or more changes in her family environ- ment exhibited similar risks but were five times more likely to have an early pregnancy.” [Rob Schwarzwalder & Natasha Tax, Family Research Council, 12/15]

This free monthly newsletter is used by dozens of churches, and has over 30,000 readers. To receive a copy in your inbox, email editor Frank Tinari, Ph.D. at tinarifr@shu.edu