Marjorie Dannenfelser, Pres. of the national pro-life Susan B. Anthony List, spoke about the great momentum in 2019 at the group’s 12th annual Campaign for Life Gala. “Going into 2020, abortion extremists are giving us an unlikely gift. They know the Roe regime is rapidly unwinding and coming to end. They are overreaching and unleashing a tidal wave of pro-life momentum.

“Part of America that has been sitting on the sidelines is awakening to the human cost of failing to engage in this battle. State lawmakers, acting on their constituents’ will, have been emboldened to advance pro-life legislation like never before, introducing more than 375 pro-life bills this year alone. In Missouri, Alabama, Ohio, Kentucky, Georgia, Montana, N. Carolina, Utah, Louisiana – across the nation we’ve seen strong bills that protect unborn children when they can feel pain, when their heartbeat can be detected, or through- out pregnancy; bills that stop discriminatory race, sex-selection and Down syndrome abortions.

“We have seen protections signed into law by courageous pro-life governors, many advanced by women of our Pro-Life Women’s Caucus. We will not let up on that momentum for an instant.” [Mallory Quigley, LifeNews.com, 6/4/19]

[Excerpts from statement of Cardinal Joseph W. Tobin] Human compassion fills our hearts with sadness when we hear about an individual who wishes to end his or her life to escape the pain and suffering of illness, disability, or disease. However, respect for human life encourages a trust & peace with God despite illness & suffering.

In reality, “death with dignity” is legal permission for one to end life with a lethal overdose of prescription drugs. This new state law has become an answer to addressing one’s fear of affliction or suffering. Also, in for-profit health care, there is the real danger that euthanasia will be seen as a cost-cutting measure. There is evidence in states that have already legalized assisted suicide that insurers encourage this “solution” instead of more costly medical care. The handicapped and impaired will feel pressure to end their lives.

Catholics in health care ministries should be able to follow their conscience instead of being coerced into providing assistance that is immoral. Dying patients who request euthanasia should receive loving care, psychological and spiritual support, & appropriate remedies for pain so they can live with dignity until the time of natural death.

A 2016 study using data from the National Survey of Family Growth found a sustained rise in nonmarital births, in particular to cohabiting mothers, coupled with a decrease in the number of these cohabiting mothers who eventually marry. Therefore, it is likely that the children of these unions will experience more family instability than their counterparts of a generation ago, compounding the marriage deficit into the future. [Susan L. Brown, J. Bart Stykes, Wendy D. Manning, Trends in Children’s Family Instability, 1995–2010, Jnl Marriage & Fam. Oct 2016; 78(5): 1173–83.]

Words for Young People
“Are you capable of giving of yourself – your time, your energies, your talents – for the good of others? Are you capable of love? If you are, the Church and society can expect great things from you.” St. John Paul II: World Youth Day – Manila, Philippines, 1995.

After years of spin, the unexpected firing of Dr. Leana Wen, Planned Parenthood’s CEO, exposed the real mission and priorities of the nation’s largest abortion provider. A NY Times report on Wen’s ouster offered illuminating details that contradicted Planned Parenthood’s downplaying the issue of abortion activism, instead making the provision of “comprehensive health care” to low-income women the focus of its concern.

Dr. Wen wrote: “The new board leadership has determined that the priority of Planned Parenthood moving forward is to double down on abortion rights advocacy.” In May, the Washington Post Fact Checker column addressed questions about Wen’s “repeated claim that ‘thousands of women died every year pre-Roe’ from a lack of legal abortion care. Her statement was rated ‘false.’ Wen was merely stating the abortion movement’s primary argument for upholding Roe v. Wade. The Fact Checker noted, by 1972, fewer than 100 women died from legal & illegal abortions together. [Joan Desmond, National Cath. Register, 7/19/19]

Toddlers Don’t Have to Go to School

Some parents are resisting the pressure to start school early. Last fall, Harvard researchers published findings in the New England Journal of Medicine showing that in states with a Sept. 1 cutoff for kindergarten enrollment, the youngest children (born in August) were 30% more likely to be diagnosed with attention-deficit/hyperactivity disorder than their peers who were born in September. This was particularly true for boys.

Increasingly, kindergartners are expected to be able to read. Researchers at the University of Virginia discovered that 31% of kindergarten teachers in 1998 agreed that children should learn to read in kindergarten. By 2010 it was 80%. Children who can’t meet this evolving benchmark may find themselves labeled or medicated.

Research shows that the benefits of early schooling are unclear. Some studies show positive results for low-income children, but often those results don’t last. For children with advantages, the upside is negligible.

Families that choose to delay or forgo formal schooling are disillusioned with a model of mass schooling that rewards conformity over creativity. They want to nurture their children’s curiosity and originality, not watch these qualities eroded by one-size-fits-all schooling. When allowed to learn on their own, children also receive a stronger connection to family, unhurried exposure to literacy and numeracy, & abundant time outdoors and at play. [Kerry McDonald, Wall St Jnl, 8/6/19]

All Humans Should Be Free From Violence …

for the duration of their lifetime, say New Wave Feminists. “We subscribe to something called the Consistent Life Ethic. We’re anti-war, anti-death penalty, anti-torture; and we extend this philosophy to our earliest moments of existence by also being anti-abortion.”

This is a challenge seeing as the unborn fetus is inside of someone else’s body and often considered part of the woman’s body itself. But science shows us that the fetus has its own body, separate DNA, a separate heart beat and brain waves, and is a totally unique genetic creation. Many would say that the fetus is actually the most vulnerable member of the human family and yet, because it is smaller, weaker, and can’t tell us to stop, we’ve decided it’s okay to dispose of it however we see fit.

It’s the ultimate in “might makes right” thinking, which women were subjected to for most of history, and in many parts of the world still suffer under. Because men were stronger and had most of the power and resources, they were able to treat us as property. Now we are passing that same type of oppression down to our unborn children… and calling it liberation. 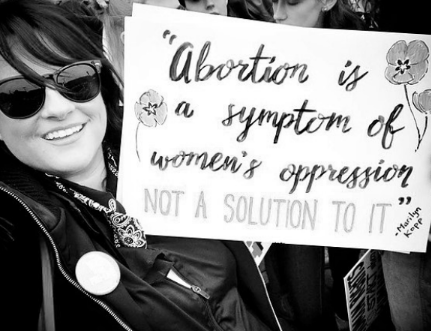 We don’t work to make abortion illegal. We work to make it unthinkable and unnecessary. And we do that by getting to the root of the need for it. Both sides unanimously agree that no woman ever wants to have an abortion. So let’s work towards a culture that supports a woman so well that she never has to have one. Let’s work towards a culture that tells her “You Can,” “You Are Strong Enough,” “If You Need Some Help – We Are Here. That’s what sisterhood is all about. [www.newwavefeminists.com]

Across the country, staff and volunteers at what were once called “crisis pregnancy centers” but now are more commonly referred to as “pregnancy care centers” focus on saving the lives of children and their mothers. There are more pregnancy care centers in the United States today than there are abortuaries. Dozens exist in states that now have only one or two abortion clinics. Unlike those clinics, they never charge for their services — and the services they offer continue to expand.

Many now offer post-abortion counseling. Women who’ve had an abortion are welcomed with open arms, not with judgment; the best way to pre- vent another abortion down the road is to embrace the post-abortive woman with the arms of Christ.

Many pregnancy care centers offer rape counseling — again, not just as a means to save the innocent child whose life resulted from the rape, but because the experience can scar a woman so badly that she may no longer believe than anyone could love her. An increasing number offer testing for sexually transmitted diseases, both to women who are pregnant and to those who aren’t.

And in addition to providing clothes and food for babies and their mothers — a service of pregnancy care centers from the very beginning — some are now employing caseworkers who help pregnant women and mothers of newborns apply for public benefits, navigate the healthcare system, make alternative arrangements for education and find employment. Christians have long provided these types of services because they were imitating Christ. In the ancient world, abortion and infanticide were common. But as Christianity was embraced, they disappeared because Christians embraced the way of life for themselves and modeled the love of Christ for others. [Editorial: Beyond the politics of abortion, Our Sunday Visitor 7/23/19 ]