by Caroline Douglas, Life Education Council Board of Trustees 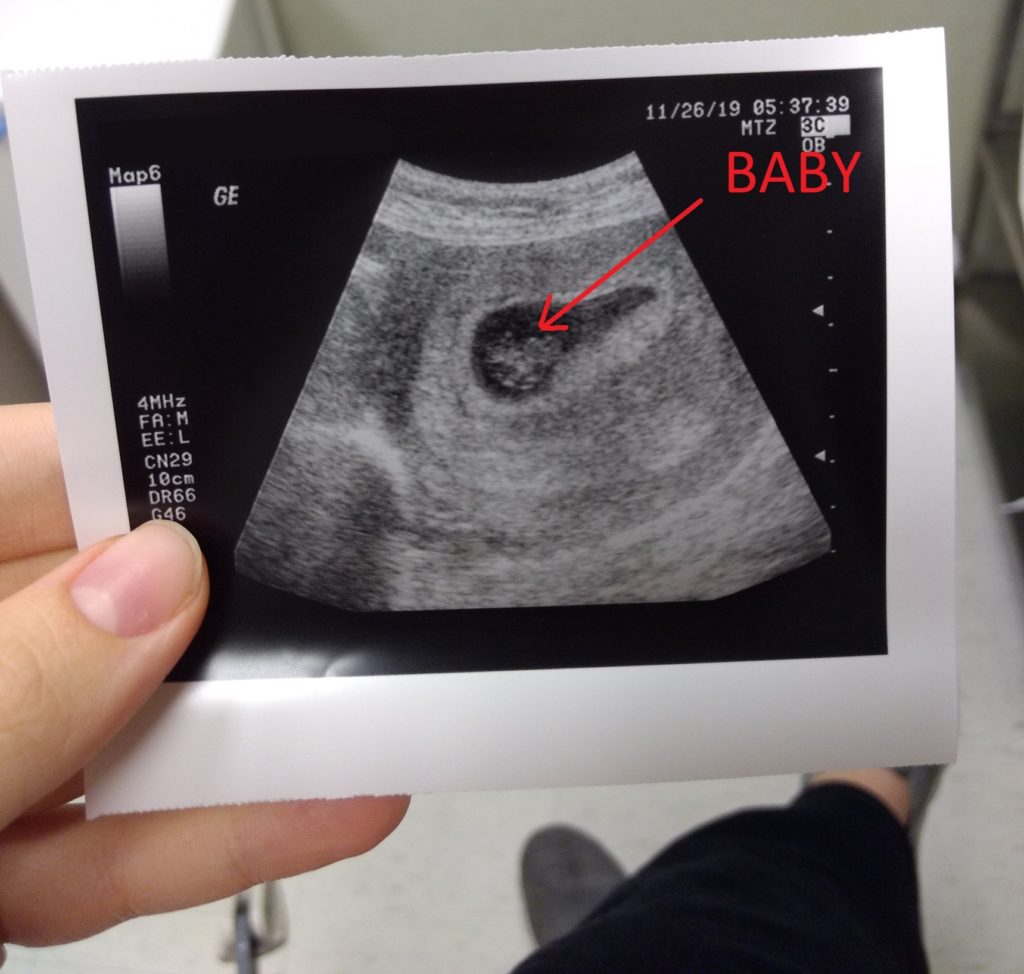 Ultrasound pictures aren’t so clear at this stage. Here’s a photo of an 8-week gestation baby (6 weeks from conception) inside the womb: 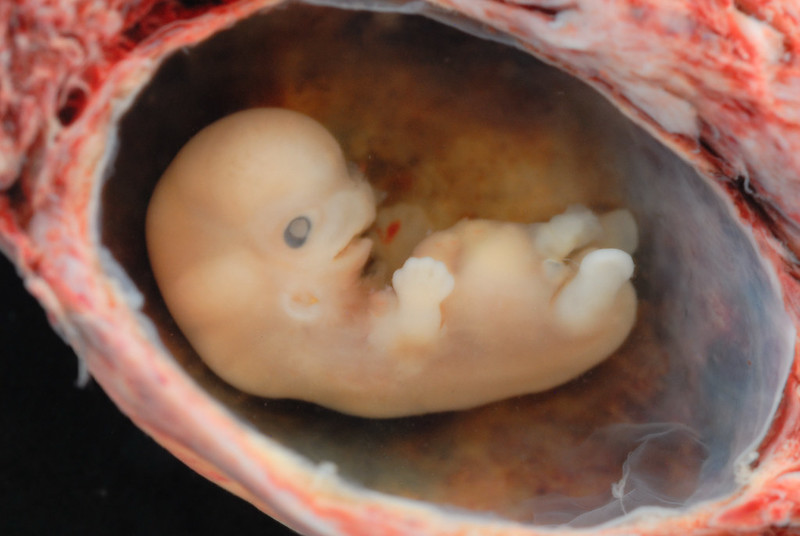 photo by Lunar Caustic under the Creative Commons license.

I found out I was pregnant just a few days before Halloween. My two-and-a-half year old son was the first to know! I told him there was “a baby in Mama’s tummy”… and he looked at my tummy and was very confused. No bump yet, and morning sickness hasn’t been bad like it was last time. Eating home-cooked meals and keeping a good supply of ginger ale and mints around has really helped!

We’re so excited to meet our little one in July. Stay tuned for more updates!

Young Woman Reports on Her Experience

“The March for Life is one of the most amazing experiences I have ever had. It was just incredibly eye-opening. It made me want to learn so much more about the movement and what we are fighting for.

I came in not knowing exactly where I stood but I do now. I know that I am a pro-lifer and I am so very proud of it. I am proud to say that I stand for others’ lives and not just my own. It was amazing to see people of all colors, religions, and states and countries all come together for one cause. I feel so strongly about this topic now and I want everyone to know the truth. The March for Life was absolutely amazing and now I know that I am the pro-life generation!!” – from Reagan [March for Life Education & Defense Fund Info flyer] Editor’s Note: The 2020 March for Life in Washington DC is scheduled for Friday, January 24th. For bus information, contact your local Respect Life Office.

Planned Parenthood attorneys attempted to paint the pro-life defendants as “extremists,” citing a statement that “we must destroy the evil Planned Parenthood empire” and calling abortion a “holocaust” as an example of radical, anti- abortion views. But this tactic only demonstrates how out of touch PP’s high-priced attorneys are. A corporation with $1.3 billion in annual revenue that was founded to suppress & ultimately exterminate certain populations its founder deemed to be “defective,” “unfit,” “human weeds” is by definition an evil empire. And when the abortion industry strips all protections from children in the womb so it can kill hundreds of thousands of preborn human beings every year, it is not “extreme” to call that a holocaust. And at least one PP abortionist said she could use a “less crunchy” technique to obtain intact bodies for organ harvesting.

The trial is expected to continue through the second week of November. Please pray for the attorneys representing the heroic pro-life defendants in this case. [www.lifelegaldefensefoundation.org]

Called the Survivors of the Abortion Holocaust Pro-Life Boot Camp, this year it was held in Washington DC. The teens who come are trained in many aspects of the pro-life movement from apologetics to street activism. The first few days include training & talks; they practice scenarios, make signs, come up with activism ideas, and then hit the streets to be a public witness.

This year the teens went to visit members of the House and Senate, asking them to take stands for life. They also held events like a “Die In” and protests at several offices. On one evening the Survivors set up a movie screen in front of the mega DC Planned Parenthood and showed the entire movie Unplanned. It was amazing to see all the people sitting around the front walk of PP watching the movie that is changing so many hearts.

The kids also did a protest inside the National Portrait Gallery near the statue of Planned Parenthood founder Margaret Sanger, exposing the racist & eugenic background of PP. [Bryan Kemper, Youth Outreach Director, Priests for Life]

Do not content yourself with anything less than the highest ideals. … You are right to be disappointed with hollow entertainment and passing fads, with aiming at too little in life. If you have an ardent desire for the Lord you will steer clear of the mediocrity and conformism so widespread in our society. St. John Paul II

TFP Student Action volunteers visited George Washington U. in DC on Sept. 30, 2019. That’s when the dark pro-abortion reality hit them. Every innocent human person – born or preborn – has the right to life. However, our culture has strayed so far from God and reason that what used to be self-evident is no longer so, particularly on left-wing college campuses where procured abortion is considered more than a right–it’s been elevated and granted the status of a secular virtue.

After reciting a short prayer, 15 TFP volunteers fanned out on the sidewalks and got to work for moral values. “Here – have a flier, 10 Reasons to Protect the Unborn,” offered one, politely. Others unfurled a banner, displayed signs or played the bagpipes to attract attention. “I’m in favor of slaughtering 1,000 babies if that helps already born babies have a better life,” said a female student coldly, without showing a scintilla of remorse. Yet each volunteer was engaged in courteous conversation or debate.

Word got out quickly: TFP is on campus. Soon, protesters set-up a large speaker that blasted vulgar “music.” Holding pro-abortion signs, dozens of students danced in chaotic disorder to pulsating beats that emphasized the F-word. Few cared about having a civil discussion. The scene looked like a group riot more than a gathering of students who spend $55,230 in yearly tuition to receive a higher education. “My body, my choice!” yelled one student. “Hail Satan!” blurted another.

On several occasions, pro-abortion students waved contraceptives in front of TFP members’ faces. The pro-abortion mob of about 100 became unruly & attempted to surround the 15 TFP volunteers. Various assaults unfolded, yet campus police officers stood observing at a distance. When their help was requested, they said, “We already called the city police. They will be arriving shortly.” Finally, police officers created a buffer zone with their bodies between the mob and the TFP volunteers. But the screaming continued: “My body, my choice.”

Later in the day, GW Voices for Choices issued a statement claiming that the TFP’s peaceful action constituted “dangerous discourse” and expressed “outrage” against the police department for not expelling the TFP volunteers. According to a pro-homosexual group, “students felt unsafe” because the police “failed to remove a nuisance from campus.”

While the mob yelled profanities, a nurse in scrubs approached the TFP banner. “I love that you’re here,” she said cheerfully. “It takes a lot of courage and I’m grateful.” Then pointing to the pro-abortion mob, she added: “That’s what Hell looks like. I want to go over there and spray them with Holy Water.” The mob followed the TFP volunteers to their vehicles where they screamed, “never come back” & spat on their van windows.

Nevertheless, many students who saw or heard about the campaign were encouraged to continue fighting the good fight for God’s law. “I just wanted to lend my support for all of the volunteers who went out yesterday afternoon & to let you all know that there are people out there who genuinely believe that the Culture of Death can be extinguished,” wrote a GWU student. Yes, with God’s grace all things are possible – even the end of abortion. After cleaning the spittle off the van windows, TFP volunteers are ready to visit the next campus. May God inspire more young Americans to stand up and fight the good fight. [https://tfpstudentaction.org/blog/unruly-pro-abortion -mob-gwu]

In September 2017, a small group of pro-lifers entered a mid-west abortion clinic, offered red roses to the women there waiting for abortions, introduced themselves, and spoke about the babies in the women’s wombs and all the help that was available for mothers who really didn’t want abortions but felt they had no choice, like most (70%) in their situation.

These rescuers gave the women who would listen information on fetal development and on the many resources available to help pregnant women, including free ultrasounds, medical help & housing, both before & after the baby is born. On that September day two years ago, 14 women left the abortion mill, and 14 babies survived.

Red Rose Rescuers was started by Citizens for a Pro-Life Society. There are about 50 such groups across the nation. In the past few years they have rescued many babies from abortion in DC, Virginia, New Mexico, New Jersey, Michigan, etc. When not rescuing, they pray outside of abortion clinics, usually on their knees, say rosaries, pray novenas, fast and make other sacrifices to help save babies.

When arrested for trespassing, they continue to help the babies while in court through their passionate witness to the truth, and through their example and counsel to fellow prisoners. Pregnant prisoners planning abortions often change their minds as they get to know & speak with rescuers. [Adele Gilhooly, Justice, Legal Center for Defense of Life, Fall 2019]

“During my training as a family physician with a concentration in women’s health & fertility, I knew I wanted to practice medicine that was aligned with my Catholic beliefs. I learned about Natural Procreative Technology that is based on the best medical science, and much better for the patient’s health. It offers an ethical, positive alternative to in vitro fertilization to help couples with infertility.” In 2009, Dr. Ann Nolte helped open the first Gianna Center (NYC). Since then eight other centers have opened. In NY & NJ alone, she said, “we’ve had 1,200 babies born to couples with infertility or at risk of miscarriage.” [Archdiocese of NY, Archives, Fall 2019]