The national Rally and March for Life in Washington DC will be on Friday, January 24th. Life Empowers: Pro-Life is Pro-Woman is the theme. Anyone who has been on a past March will tell you how inspiring is the experience. Check your local area churches for buses to the March. 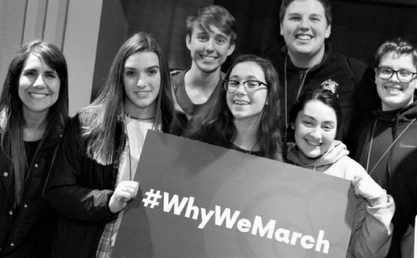 Pittsburgh Steelers’ Devlin Hodges from Alabama has been the relief starter in several crucial games, after joining the NFL team a few months ago. In a recent interview, he said: “I just want to do the best I can and have everyone else do the best they can, so it all works out for the glory of God. Every night I thank God for all the blessings he has given me, my family and friends. I ask for his continued blessings so that I can live how he wants, bringing glory to him.”

Devlin and his family weren’t cradle Catholics but converted while he was in high school. “I went with a friend to Mass. And I could feel the presence of God there, and I was impressed by the Church carrying on the tradition that Christ established at the Last Supper.”

“I’ve been to the team Mass a few times with two-time Pro-Bowler Alejandro Villanueva. He was surprised since I’m from a part of the country known for being Protestant.” [National Catholic Register, 12/22/19]

Bethan Simpson of England, at her 20-week scan in early 2019, learned her unborn daughter had spina bifida. The congenital defect leaves the spinal cord exposed through a gap in the back-bone which can lead to a variety of serious problems including paralysis.

Mrs. Simpson wrote on her Facebook page, “Our lives were such a roller coaster for the next few weeks. We were offered continuing pregnancy, ending pregnancy or a new option called fetal surgery – fixing her before she is born. We had to do it.” The BBC reported that the successful 4-hour surgery at University College Hospital (London) last December involved opening her womb and lifting her baby into position to repair the hole, and repositioning the baby’s spinal cord.

“Sadly 80% of babies in England are terminated when their parents get told their baby has this condition,” Mrs. Simpson wrote at the time. Spina bifida is “not a death sentence. She has the same potential as every one of us.”

“I feel that the greatest destroyer of peace today is abortion. If we can accept that a mother can kill her own child, how can we tell other people not to kill one another.” Saint Mother Teresa

In a Facebook update today, we read: “She’s beyond exceptional. She’s spina beautiful and she’s not letting her condition defy her. No matter how little she is, she genuinely is my hero, she’s my savior and I’m so proud to show her off.”

Each and every time an unborn baby undergoes prenatal surgery, often because of signs the baby has spina bifida, it unavoidably raises a dilemma for pro-abortion partisans. This child is either partially or completely removed from her mother’s womb, surgeons work their wondrous ways, and she is placed back inside her mom where she nestles down until delivery time. The child is a baby when she was in the womb, baby when she was temporarily outside the womb, and baby when she is returned to home base.

Yet an “unwanted” child of a similar age is … what? When a woman decides she does not wish to “carry her pregnancy” to completion, does it make sense that the baby can be dehumanized into a “choice”? It is cognitive dissonance on steroids. [Dave Andrusko, www.LifeNews.com, 12/26/19].

“Is it surprising that today we have become so morally blind that we save the baby whales at great cost, and murder millions of unborn children?” Alice von Hildebrand, The Privilege of Being a Woman.

There is an intimate relation between a mother & her prenatal child. In a mother’s womb following conception, God builds a relational organ that can only be described as amazing: the human placenta. Baby and mother can be thought of as reaching out for one another at a physiological level to build the placenta, the only purposely temporary organ in humans and the only one that is created by two people in cooperation. The placenta provides the functions normally assumed by one’s lungs and kidneys and additionally has metabolic, thermo-regulatory, endocrine and immune functions.

The inter-connectedness between the prenatal child and her mother is intimate and more profound than previously believed. We know that the growing baby sends some of her cells across the placenta into her mother in a way that we are only beginning to understand. These cells migrate to various sites of maternal tissue and integrate into them. They then assume the function of the surrounding tissue and begin to function as such. Researchers are in the early stages of attempting to understand the full function of these cells, but some models suggest that some of these cells continue to aid the mother years after her baby is born such as the spacing of future siblings, and protecting women against autoimmune disorders.

Theologically, we can say that Mary not only carried the Son of God in her body when he was in her womb, but that she likely carried his cells in her body throughout her life in a way that further magnifies her position as the glorious Theotokos. [Kristin M. Collier MD, Church Life Journal, Notre Dame U., 7/25/19]

Ultrasound Was a “Bombshell”

Terry Beatley, author & founder of Hosea Initiative, shared her exclusive interview with Dr. Bernard Nathanson who, in 1969, co-founded the National Association for the Repeal of Abortion Laws, now called NARAL Pro-Choice America, which advocates for abortion rights. His efforts succeeded with the Roe v. Wade decision that legalized abortion nationwide in 1973. Nathanson claimed responsibility for the death of more than 75,000 pre-born babies, including two of his own unborn children.

A few months after the Roe v. Wade decision, a new technology transformed his views on abortion. “The bombshell was real-time ultrasound. It made everything come alive,” he told Beatley. “I finally came to the conviction that this was my patient. This was a person. I was a physician, pledged to save my patients’ lives, not destroy them. So, I changed my mind on the subject of abortion.” The doctor later became one of the prominent leaders of the prolife movement in America and produced the 1985 anti-abortion film “The Silent Scream.” [Terry Beatley, What If We’ve Been Wrong: Keeping My Promise to America’s “Abortion King”]

But big divisions on the topic persist nationwide. States across the South and Midwest passed 58 abortion restrictions in the first six months of 2019, 25 of which would ban all, most, or some abortions. Meanwhile, state legislatures mostly in the North- east and West have enacted legislation to protect abortion rights and expand access to contraceptive services. [The Epoch Times, 12/10/19]

Abortion Industry Incapable of Policing Itself

The Supreme Court upheld a Kentucky law letting women see an ultrasound of their unborn baby before having an abortion. Ultrasounds are generally done before abortions to determine the age of the baby prior to the abortion, but abortion clinics normally don’t let women see them. The American Civil Liberties Union had asked the courts to strike down the law.

But 6th Circuit judges ruled that the law did not violate a doctor’s First Amendment rights to free speech. “The information conveyed by an ultrasound image, its description, and the audible beating fetal heart gives a patient greater knowledge of the unborn life inside her,” wrote John Bush. “This also inherently provides the patient with more knowledge about the effect of an abortion procedure: it shows her what, or whom, she is consenting to terminate.”

SBA List President Marjorie Dannenfelser said: “Modern ultrasound technology opens an unprecedented window into the womb, providing undisputable evidence of the humanity of the unborn child. The abortion industry, proven incapable of policing itself, will stop at nothing to keep vulnerable women in the dark for the sake of profit, which is why state laws protecting women’s right to informed consent are so important.”

The law requires abortion center staff to display the ultrasound image for the woman & describe the dimensions of her unborn baby and the presence of internal organs, if seen. Fines are up to $100,000 for the first offense and $250,000 for subsequent offenses if abortion doctors violate the law by failing to give women the opportunity to see the ultrasound of their unborn child. [Steve Ertelt, Supreme Court Upholds Kentucky Law Letting Women See Ultra-sound of Baby Before Abortion, www.LifeNews.com, 12/9/19]

by Caroline Douglas, LEC Board of Trustees
Today I had a check-up ultrasound at 13.5 weeks. 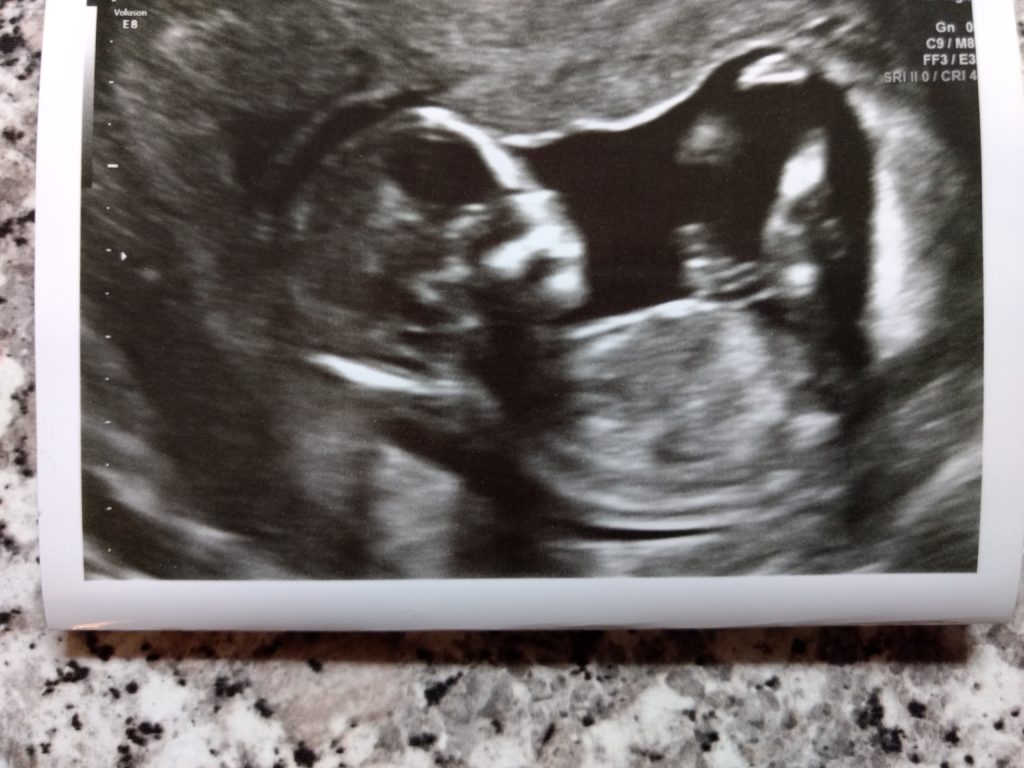 Wow! What an incredible experience. My little baby was moving nonstop! S/he was wiggling, stretching, and even kicking his/her feet against me. At one point, when the lab tech pushed the probe into my belly, s/he arched her back and neck, as if doing some sort of yoga pose!

I was also amazed at how fully formed s/he was. For my last pregnancy, I only had an ultrasound at 20 weeks. This baby looked as formed as a 20 week gestation baby, just smaller! The nose, the chin, and the head were all perfectly clear on the ultrasound. 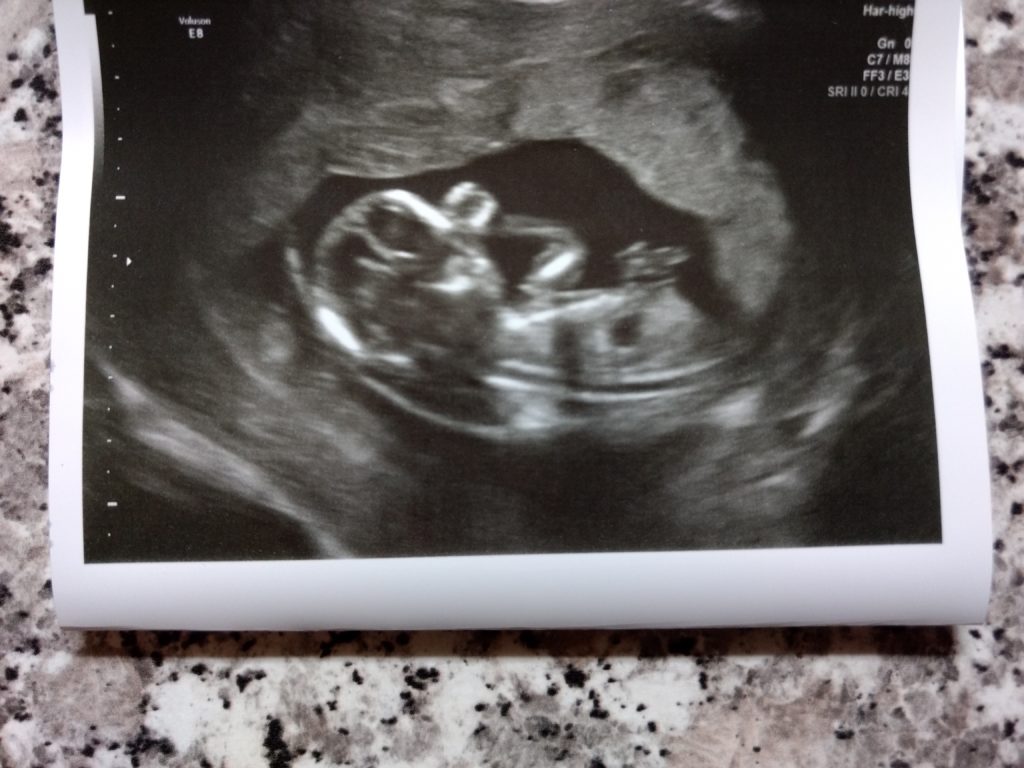 Everything looked normal, and we are especially thankful for this as we had a little bit of a scare a few days ago and I was worried that I’d miscarry. But everything is looking great!
We don’t know the gender yet–we’ll know February 20, at my next ultrasound. However, when I showed my 2-year-old the ultrasound pictures, he said “SISTER!” So maybe he knows more than we do… 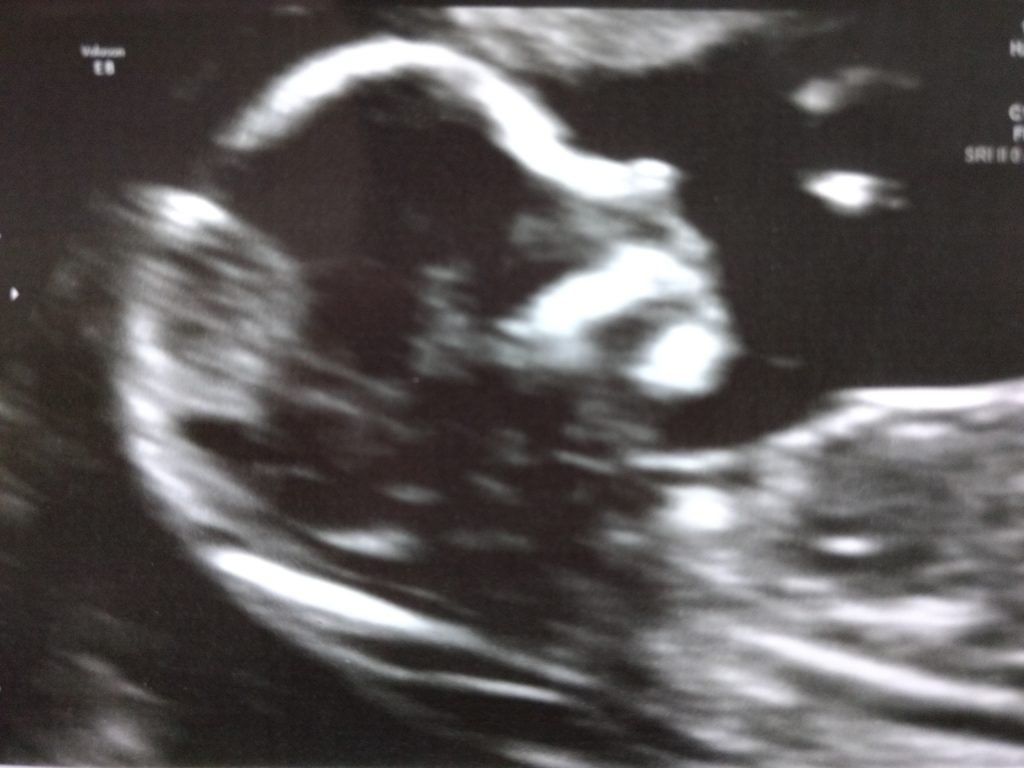 According to pregnancy resources, my baby is about 3-4 inches long now, and has his/her own fingerprints! We’re so excited to meet him/her in July.