It features prominent female leaders and black activists, and has far more support from non-religious Americans than abortion supporters admit. Late last year, the Church of God in Christ, the largest Pentecostal denomination and overwhelmingly African-American and Democrat, unveiled its “Resolution on the Sanctity of Human Life.”

The resolution stated: “Abortion is genocide. Abortion must end to protect the life of the unborn. This issue of personhood has haunted America since the Dred Scott, Plessy v. Ferguson and Roe v. Wade decisions. Just as slavery was overturned in America, Jim Crow was defeated, and Nazi Germany was overthrown, we pray that the heinous industry of abortion will become morally reprehensible worldwide.” 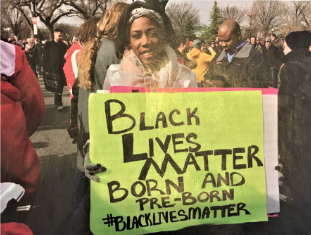 Pro-life leaders often mention the deep ties between the earliest legal- abortion advocates and the eugenics movement, noting that Planned Parenthood’s founder, Margaret Sanger, wanted to decrease what she saw as “unfit” populations including, in her view, blacks. She promoted birth control, though not abortion, to limit low-income & minority groups & proposed mandatory sterilization for those she deemed “feeble-minded.” Such views were widely shared among the earliest abortion advocates.

Secular Pro-Life, found in 2009 by Kelsey Hazzard, represents non-religious pro-lifers. She is assisted by Terrisa Bukovinac, a member of Democrats for Life and founder of Pro-Life San Francisco, which aims to galvanize West Coast young people. After seeing videos of abortion procedures, she became pro-life. “You can’t justify abortion any more than you can justify the killing of a born person. There is no consistent, objective distinction between an unborn person and a human being.” [Alexandra DeSanctis, The Pro-life Movement You’ve Never Heard Of, National Review, 4/6/20. Additional groups are highlighted in her article.]

Chemical abortion is a two-step process involving the ingestion of drugs, one to starve the unborn baby, the other to induce labor. U.S. government rules require the first drug to be dispensed in clinics or hospitals by doctors or other medical providers. Women doing this are vulnerable to four times as many adverse events as women undergoing surgical abortions.

Melanie Israel, a research associate at the DeVos Center for Religion & Civil Society at the Heritage Foundation, said the abortion industry’s push to loosen restrictions on chemical abortion amid a pandemic is their move not to “let a good crisis go to waste.” She emphasized: “It’s unfortunate to see this pandemic being exploited to achieve lower restrictions, which for a long time has been on the wish list of abortion proponents, long before the coronavirus was on anyone’s radar.”

“If you’re suffering from severe blood loss or perhaps an incomplete abortion and you need to take another round of drugs to resolve it, that’s all going to require additional follow-up during a pandemic when people are needing to isolate, when hospitals in certain areas are being overwhelmed. It’s sad that the abortion industry is focused on expanding something that could actually com- pound those problems in the effort to fight the coronavirus.” [Lauretta Brown, National Catholic Register, 5/10/20]

According to John Clark who was home schooled as a child and who has home-schooled his own children: “For four decades, home-schooling has always had to prove itself by going over a bar that was higher than the one set for any other form of education – and home schooling has soared over it.” So he was very upset over a recent article in Harvard Magazine.

Home-school parents are called “extreme religious ideologues” who “question science,” “promote female subservience” and encourage “white supremacy.” Nothing could be further from the truth, based on the evidence of decades of home-schoolers throughout the nation. He asks why the writers didn’t do any meaningful field research such as visiting home-schooling families. These writers did not employ the basic tool of science, observation, yet dare to offer all sorts of unfounded criticisms. [John Clark, Commentary, National Catholic Register, 5/10/20]

Some things are, in the words of the Church, “intrinsically evil” such as slavery, adultery, abuse of children, and the direct killing of the innocent, Therefore, they can never be used to justify any other goal, no matter how worthy. Yet, many of us can find justification for our behavior by appealing to a good end that we were hoping to achieve.

Society often goes along with this faulty approach, thinking that the righting of a general wrong justifies morally irresponsible behavior in particular cases. This is supremely dangerous because the moment we say that evil can be done for the sake of the good, we have effectively denied that there are any intrinsic evil acts.

So, as we legitimately fight the great evils of our time, we must remember St. Paul’s simple principle: never do evil that good might come of it. [Bishop Robert Barron, Word on Fire Ministries.]

Dr. Richard Fitzgibbons has authored Habits for a Healthy Marriage: A Handbook for Catholic Couples. It presents key habits that foster healing and growth in a marriage, helping couples identify and resolve major emotional conflicts that weaken relationships and hurt their marriages. A book designed to help those newly engaged, recently married, or married for many years.

Described as required reading for anyone interested in the 20th century history of feminism and its manipulation by powerful men, Sex and the Catholic Feminist: New Choices for a New Generation by former Cosmopolitan writer Sue Ellen Browder challenges the notion you can’t be a feminist and believe in God. She uncovers why the pro-life thread of feminism in America has been ignored by the media and left out of public conversation for fifty years. [Ignatius Press, Ft. Collins, CO, www.ignatius.com]

Is the SAT Really the Problem?

The Univ. of California announced it will stop using the SAT and ACT for admissions. “Requiring SAT scores, the argument goes, discriminates against low-income, black and Latino children who perform poorly on the tests because they lack advantages such as prep courses.” But seldom is any recognition given to what research indicates is the most important factor in test performance: living with one’s biological parents under the same roof.

“Family structure is about as important as family income in predicting who graduates from college today,” says W. Bradford Wilcox, sociology professor at the Univ. of Virginia. The data are pretty conclusive. The more intact the family, the better the education outcomes. [William McGurn, Wall Street Journal, 5/25/20] 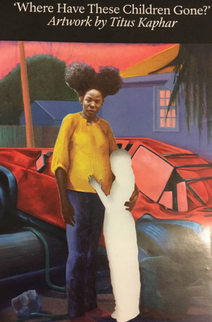 The May 24, 2020, issue included this painting titled “Beneath an Unforgiving Sun.” The painter intended to show that the “trauma that these women are conveying is one that can exist in the context of the 1960s or in the context of Covid-19.”

But the painting could also dramatize the loss of minority children through abortion. Catherine Davis of the National Black Pro-Life Coalition says that 20 million black lives have already been lost to abortion since 1973, more than the entire black population in 1960s America.

The groups filed friend-of-the court briefs in early June in Fulton v. Philadelphia, which the court will hear next term to determine if Philadelphia can exclude a Catholic social services agency from the city’s foster care program because the agency does not accept same-sex couples as foster parents. Instead, it refers those couples to other agencies. The briefs argued that the court should allow the city’s Catholic social service agency to continue its foster care role and protect faith-based ministries nationwide to ensure they maintain their First Amendment religious exercise rights.

A brief by the Catholic Association Foundation, a group which defends the church and religious liberty, said severing ties with Catholic-run foster care and adoption programs, “under the guise of enforcing ‘neutral’ anti-discrimination laws, is the equivalent of hanging a ‘Catholics Need Not Apply’ sign outside of every state and local health and human services department. Such a precedent is odious to the Constitution’s guarantees of free speech and the free exercise of religion, and should not stand.” [Carol Zimmermann, Our Sunday Visitor, 6/9/10]

Prayer Petitions for Father’s Day May expectant fathers lovingly support the mothers of their children in welcoming new life; For married couples longing for a child: May God grant them the grace and strength to place their faith in His loving plan.

This free monthly newsletter is used by dozens of churches as a single-sheet bulletin insert, and is now posted on four diocesan websites. To receive it free, email editor Frank Tinari, tinarifr@shu.edu