On Saturday, Sept. 12th, Citizens for a Pro-Life Society, Priests for Life & Pro-Life Action League will co-sponsor the 8th annual National Day of Remembrance for Aborted Children, calling on pro-life Americans to hofnor the grave sites of our aborted brothers and sisters. Solemn prayer vigils will be conducted at 54 such grave sites as well as at dozens of other sites dedicated in memory of aborted children.

Tens of thousands of these children have been retrieved & buried at grave sites across our nation. The stories of how they were killed, how they were found, and how they were buried, along with the pictures and videos that document those events, are powerful tools to awaken the consciences of our fellow citizens. But while a funeral and burial for an aborted baby may be a relatively rare event, the opportunity to visit the burial places and recall how those children got there shouldn’t be.

Pro-lifers are also encouraged to carry on the spiritual mission of the Day of Remembrance throughout the year by visiting a grave site of aborted children or other memorial site to offer prayers of mourning for the victims of abortion. You could pray one of the suggested prayers (found at its website): Prayer at a Gravesite or Memorial Site; Prayer of Mourning for Victims of Abortion; Prayer for Those Who Have Lost a Child to Abortion.

“A nation that kills its children in the womb has lost its soul.” Saint Mother Teresa

The U.S. Catholic Bishops have stated: that the threat of abortion remains our preeminent priority because it directly attacks life itself, because it takes place within the sanctuary of the family, because of the number of lives it destroys. Despite all of the other issues we face in this nation, we are urged to pray specifically to end abortion in our country, and for the protection of human life from the moment of conception to natural death.

A Better Way to Plan Your Family

Natural Family Planning (NFP) is the most effective, natural, healthy & inexpensive system for couples trying to achieve pregnancy, couples having fertility concerns or couples planning to postpone pregnancy – all by observing natural signs of fertility.

Research shows NFP is as effective as the birth control pill (but has no hormonal side-effects), can help monitor your reproductive health, and can help strengthen the couple’s relationship. These methods successfully address: delaying or achieving pregnancy; hormonal imbalance; infertility; menstrual cycle abnormalities; endometriosis; PMS; and polycystic ovarian syndrome.

The two most popular & effective methods are the Creighton Method and the Marquette Method. Creighton relies upon the standardized observation & charting of biological markers that are essential to a woman’s health and fertility. The bio-markers also indicate abnormalities in a woman’s health. It is the only family planning system which has net- worked family planning with gynecologic and procreative healthcare, and health maintenance. Many physicians have been trained to incorporate the Creighton Method into their medical practice. It is great for those with normal or abnormal cycles or those struggling with infertility.

What sets the Marquette Method apart from most other methods is its incorporation of hormone monitoring as well as simplifying sometimes unclear signs of fertility. A woman can track her hormone levels through her cycle using the Clearblue Fertility Monitor together with the Marquette Method to identify her fertile window. This method provides clear and objective hormone readings taking much of the guesswork out of natural family planning. It is great for those with normal or abnormal cycles or postpartum.

For all NFP methods, couples need to be diligent and have plenty of self-control. They have to follow instructions completely to be successful.

To sign up for an NFP intro class, or reach trained medical providers in the NYC metro area, contact the Office of Family Life, Diocese of Paterson, NJ. [https://insidethewalls.org/nfp]

Students typically spend only 15 hours per week in the classroom. Unfortunately, binge drinking, drug use and hook-up culture are common on most college campuses. College students report high rates of STDs, pregnancies, abortions and sexual assaults.

“That’s no way to grow in faith and maturity” says the Cardinal Newman Society (CNS). It has identified faithful Catholic colleges where “chastity and clean living are encouraged. Most of them provide single-sex dorms, which most other colleges have abandoned. Even more helpful, some preserve the privacy of bedrooms, forbid- ding opposite-sex visitors at all times of the day. We think this is ideal–a common-sense, traditional practice that protects privacy, chastity and safety” and reduces the likelihood of sexual assault against female students. At a truly faithful Catholic college, “you’ll find a culture that respects chastity, charity and virtue. And you’ll make good friends who share your priorities and values–the sort of friendships that can last a lifetime!”

Learning or a “College Experience”?

Schools across America are fiercely competing to offer the best buildings and recreation centers, the most things to do around campus, all tied together with the biggest scholarships package. We have stopped emphasizing the bachelor’s degree and now emphasize the “college experience.” Yet professors determined to undermine even the most rooted Christians lurk on campuses far and wide. Biases exist in almost all subject areas, many of them propelled by an anti-Christian agenda.

Even if a Catholic Newman Center on a campus is active, college is hard enough without having your beliefs challenged at every turn. Unfortunately, while many colleges claim to be Catholic, few adhere to Church teaching in the classroom and on campus. [Elizabeth O’Donnell, College: a Choice of Life or Death, Ave Maria Magazine, Summer 2020]

“American women had babies at record-low rates last year and pushed U.S. births down to their smallest total in 35 years, according to federal figures. The total fertility rate, i.e., the average number of babies a woman would have over her lifetime, ticked down to 1.7 in 2019. Almost every year since 1971, that rate has been below 2.1, which is the level needed for the population to replace itself, without accounting for immigration.” [Wall Street Journal, 5/20/20]

Each year the month of October is designated as Respect Life Month. Some of the activities that will be available to us include prayerful participation in the one-day National Life Chain, “baby showers” that solicit donations of clothing for pregnant moms, and sign-ups for the March of Life (in January). Some parishes may host guest speakers or discuss films. In addition, the 40 Days for Life campaign for picketing Planned Parenthood will be in full swing during the month, having started on September 23rd.

Jesus, Son of an Unwed Mom

“As Christians we first met Jesus as a stirring embryo in the womb of an unwed mother and saw him born 9 months later in the poverty of the cave. It’s no coincidence that Jesus stood up for what was just and was ultimately crucified because what he said wasn’t politically correct or fashionable. As followers of Christ we are called to stand up for life. Against the politically correct or fashionable of today we must fight against a legislative agenda that supports and even celebrates destroying life in the womb. The laws we create define how we see our humanity. We must ask ourselves, what are we saying when we go into a room and snuff out an innocent, powerless, voiceless life?” 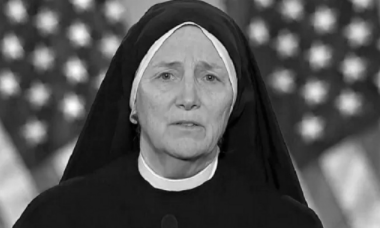 So said soldier, surgeon and religious sister Deirdre Byrne. A retired colonel in the U.S. Army and a member of the Little Workers of the Sacred Hearts of Jesus and Mary, Byrne has done missionary work with the poor and sick across the globe, including in countries like Haiti, Sudan and Kenya. During her time in the military, she discerned a religious vocation, and sought a religious order that would not require her to give up her work in the medical field. Her discernment led Byrne to her order, an Italian pontifical institute founded in the late 19th century with the primary apostolates of teaching and medical care, and present in Washington DC since 1954.

“The largest marginalized group in the world can be found in the U.S. They are the unborn,” she said. “As a physician I can say without hesitation, life begins at conception.”

At his party’s convention, the U.S. President said: “On September 11, 2001, the sister raced to Ground Zero, through smoke and debris, she administered first aid and comfort to all. Today Sister Byrne runs a medical clinic serving the poor in our nation’s capital. Sister, thank you for your lifetime of service. Thank you.” [www.LifeNews.com, 8/27/20]