The Rise of Pro-life Women

Thus far the number of newly elected pro-life women in Congress is up to 16. Seven of these candidates flipped seats held by pro-abortionists. The group includes the first Iranian American elected to Congress, a member of the Cherokee nation, a daughter of Cuban exiles, & a first-gene ration Korean American, showing that the life issue brings a diverse coalition together. Including incumbents, the tally of pro-life women in the House is now 27. In the Senate, the ranks of pro-life women continue to grow. Joni Ernst and Cindy Hyde-Smith won competitive reelection races, & Cynthia Lummis will be the first woman to represent Wyoming in the Senate. 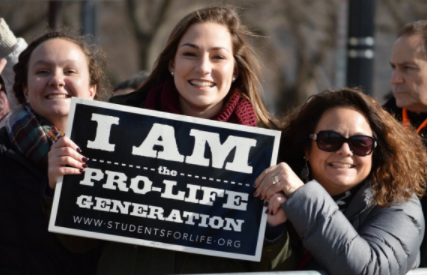 This is breathtaking progress with three out standing justices on the Supreme Court, including the court’s first pro-life woman Amy Coney Barrett, and more than 200 new federal judges who will serve for life, providing the best chance in half a century to mount a serious, successful challenge to the status quo under Roe v. Wade.

Whatever else happens, the American people have spoken. No “mandate” exists to enact deeply unpopular policies expanding abortion-on-demand through the moment of birth, paid for by taxpayers, or to drastically remake the brilliant system of checks and balances that has existed from the founding of our nation.

The rise of pro-life women leaves me more convinced than ever that momentum is on our side, and the battle to save unborn children and their mothers is one we can – and will – win. [Marjorie Dannenfelser, Pres. of Susan B. Anthony List, a pro-life group that fights the well-funded abortion lobby. www.LifeNews.com, 11/20/20] Ed. Note: Famed rock & roller Dion DiMucci objected to being connected to a Catholic Voter Guide in Our October issue, saying the Italian Tribune took it out of context. We extend our apologies.

Although Coloradans rejected a moderate measure to prohibit abortion after 22 weeks of pregnancy, when many unborn children are able to survive if delivered premature. Louisiana voters backed an amendment declaring that the state constitution does not protect a right to abortion or abortion funding. It is the fourth state to pass such an amendment, intended to preempt post-Roe v. Wade courts from discovering a right to abortion in state constitutions. If the Supreme Court overturns or even scales back its invented abortion right, expect to see many more such votes across the country. We hope voters take their cues from Louisiana. [National Review, 11/30/20]

On Thanksgiving eve, the U.S. Supreme Court ruled 5-4 that NY Gov. Andrew Cuomo’s executive order limiting occupancy in houses of worship could not stand, saying that “even in a pandemic, the Constitution cannot be put away and forgotten.” It was a win for the Diocese of Brooklyn & Agudath Israel of America, who argued that declaring religious services to be “non-essential,” while labeling pet stores, hardware stores and other secular entities “essential,” was a serious First Amendment infringement on their religious liberty.

We would expect secular militants to be angry, and they were. No organization has exerted more time, money, and energy using Covid-19 as a pretext to abridge religious liberties than Americans United for Separation of Church & State, founded by anti-Catholics after World War II; to this day it remains hostile to Catholics and to other religious affiliations, and filed an amicus brief in this case.

Liberal religious publications and organizations were in a jam: if they approved of the Supreme Court ruling, it would put them on the side of religi ous conservatives; if they disapproved, it would link them to secular militants. So, they said nothing!

Religious media outlets should be expected to affirm a special place in constitutional law for religious institutions—that is what the First Amendment ordains! Their failure to do so is telling. [Bill Donohue, Catholic League, 11/30/20]

Child Book “When You Became You”

Teaching little children when life begins is not only vital to helping them understand the morality of life issues, it’s also fundamental in fighting progressive ideology taught to children in schools, authors Brooke Stanton & Christiane West said in an interview with the Daily Caller News Foundation.  “Having a book that starts them off correctly and hopefully keeps them protected against false infor mation later is part of the goal of this book as well.”  Stanton & West co-founded Contend Projects, a “secular, nonpartisan, science education nonprofit for spreading accurate information and awareness about the biological science of human embryology and when a human being begins to exist.” Most pro-life advocates argue that life begins at fertilization. Pro-abortion advocates have various definitions of when life begins, or when unborn babies should be considered human: some argue that life begins with a viable heartbeat, while others argue that life does not begin until birth.

“Your humanity— the fact that your nature is a human nature— is what you have in common with all human beings,” page 1 of the book reads. “It does not matter what you look like, where you are from, how old you are, how young you are, if you can talk, if you can walk, if you can dance, or even if you aren’t born yet. You are a human being.”

“There are countless children’s books that teach children to care about the environment, but children also want to learn about their own science stories. This is actually the real science,” Stanton told the DCNF. [Mary Margaret Olohan, www.LifeNews.com, 11/20/20]

Banned for Being Pro-Life – But Victorious

A British midwife student won a legal victory against the University of Nottingham after it threatened to expel her because of her pro-life beliefs. Julia Rynkiewicz, 25, received an apology and won a settlement from the university this fall. She is just one of many pro-life medical workers who are facing discrimination simply for believing that unborn babies are patients who deserve care, too.

Earlier this year, Rynkiewicz said she was banned temporarily from finishing her hospital training after her instructors questioned her “fitness to practice.” Their reason was her pro-life Catholic beliefs and her leadership as pres. of the Nottingham Students for Life. She said she filed the lawsuit so that no other student would be unfairly punished for their beliefs. “The settlement demonstrates that the university’s treatment of me was wrong. I hope this means that no other student will have to experience what I have.” She said she had to delay her studies and postpone graduation as a result of the investigation, and did not qualify for financial aid while she was temporarily banned from completing her hospital training.

In a statement, the university said it is considering how to better respond to such situations in the future. It also emphasized that it supports killing of unborn babies in abortions.  Pro-life medical professionals in the USA, UK and other parts of the world are increasingly con cerned about conscience protection rights.

Dr. Regina Frost, a New York OB-GYN, recently wrote a column for The Federalist describing how her state leaders, Planned Parenthood and others are fighting against her religious freedom via a lawsuit challenging a federal government rule that protects medical professionals’ conscience rights.  Last year, a Vermont nurse said her employer forced her to help abort an unborn baby even though it knew she objected. In South Africa, a medical student was prohibited from practicing medicine for two years while he was prosecuted for ‘unprofessional conduct’ for telling a pregnant woman that an unborn baby is a living human being and an abortion kills a human life. A medical board finally dropped the charges this fall.

These events demonstrate the importance of conscience protection laws. Without them, medical students can be prevented from practicing, medical workers can lose their jobs and, worse, be prosecuted just for telling the truth. [Micaiah Bilger, www.LifeNews.com, 11/25/20]

Pope Francis, answering the pleas of Argentine women who are fighting for the rights of unborn babies, wrote a public letter to his home country this week urging its leaders not to legalize abortions.  Their letter and the pope’s response both appeared in the newspaper La Nacion. “Is it fair to eliminate a human life to solve a problem? Is it fair to hire a hitman to solve a problem?” the pope wrote, adding that the pro-life women “know what life is.”

Argentina is facing renewed pressure to aban don its protections for unborn babies. Widespread public opposition stopped a similar bill from passing in 2018. Pro-life advocates hope to do so again.  One survey that the women conducted found that 80 percent of Argentines oppose abortion.

“The country is proud to have such women,” the Pope wrote. “Please tell them for me that I admire their work and their testimony; that I thank them from the bottom of my heart for what they do, and that they keep going.”

Currently, Argentina protects unborn babies from being killed in abortions, with a few exceptions. Most countries in Central & South America protect unborn babies from abortion. Pro-abortion groups often overestimate the number of illegal and unsafe abortions that occur in countries across the world, & some have admitted to lying about the numbers. Growing research also indicates that access to basic health care, not abortion, is what really helps improve women’s lives. [www.LifeNews.com, 11/25/20]