Under a sonogram photo of a developing baby, on Jan. 22nd National Right to Life wrote:

“We don’t see a potential life….
We see a life with potential”

The full-page display was placed by the group because: “An unborn baby’s heart is beating until she dies from abortion. Her brain waves can be recorded as early as six weeks. If you believe a life with the potential to laugh, to love, and to do great things is worth saving, please join with us.” [www.facts.nrlc.org]

1. Force the Little Sisters of the Poor to provide contraceptives & abortifacients to their employees
2. Have taxpayer money fund abortion in the U.S. and in our foreign aid to other nations
3. Promote euthanasia & physician-assisted suicide
4. Eliminate federal regulations that protect the conscience rights of Catholic doctors, nurses and health-care workers

In other words, deliberately facilitate what the Gospel & the Church teach are grave moral evils & injustices. [George Weigel, The Beacon, 1/21/21]

Until Every Unborn Child is Protected

On the 48th anniversary of Roe v. Wade decision, we recall the late great Fr. Richard John
Neuhaus. “We shall not weary, we shall not rest,” he declared at the 2008 National Right to Life Convention, “until every unborn child is protected in law and welcomed in life.”

We are called to be faithful to this mission, no matter how daunting. And, though Roe still reigns, the cause for the unborn has nevertheless made & continues to make great strides saving precious lives every day. Forty-eight years into this, there are millions of good people working at every level to protect the unborn, from the dedicated volunteers at pregnancy centers to pro-life educators, journalists, clergy, lawyers, & legislators, including 18 pro-life women who were elected to Congress in Nov. We have not nor will we ever give up.

A recent article features a fresh look at the Roe travesty. “A Case for the Revocation of Roe v. Wade,” says Editor Anne Conlon, is by Lyle Strathman, an 85-year-old retired electronics engineer. His multi-faceted argument, that legalized abortion under the guise of Roe is an aberration of human reason, of biological science, of philosophical analysis, & the U.S. Constitution, is presented with the kind of elegant economy and interlocking logic even Steve Jobs could have admired.”[https://humanlifereview.com/issue/fall-2020/]

Who Are the Sisters of Life & Why Did
Eight More Young Women Just Join? 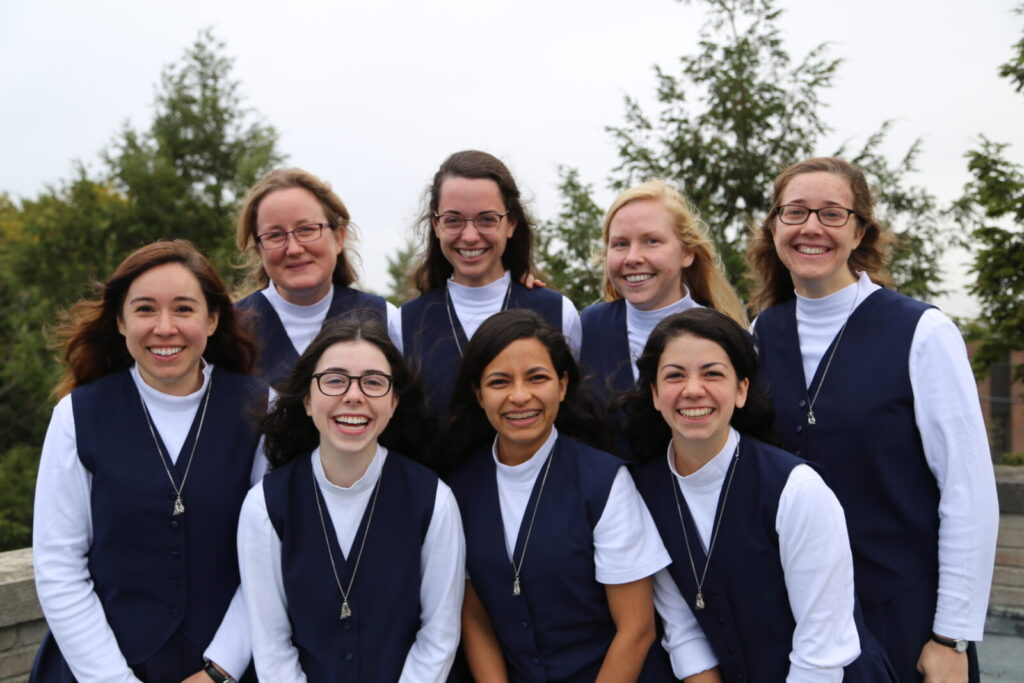 The Catholic religious order is one of the fastest growing orders in the U.S. The photo shows the most recent group of young women who joined as postulants. Here is the order’s mission statement: “Like other Catholic religious Sisters, we’vemade a decision to leave behind what the world offers to give our whole lives to God by professing vows of poverty, chastity, and obedience. What does that mean? It means we don’t personally own anything – Jesus is our treasure. We don’t get married – Jesus is our one love. And we freely surrender to lives of obedience – Jesus is our one will.

This sets us free to love in a universal way, and commit wholeheartedly to the mission Jesus entrusts as we live in community with one another.

And, as Sisters in love with life, we’ve also made another decision: We vow to protect and enhance the sacredness of every human life. Why? Because we want to uphold the dignity and worth of each person, created from and for God’s great love. Entrusting ourselves completely to the Lord of Life, we commit our lives to the protection of human life and to the promotion of new life in Christ, acknowledging the goodness of every person, and sharing the gift of God’s abundant mercy with all those we meet. In this way, we seek to help reveal to each person their own innate goodness, the particular love God has for them, and invite them to something greater: a life of truth, joy, and hope.” [https://SistersofLife.org]

Are You a Man or a Woman?

According to a new federal order, school restrooms, locker rooms, & sports can now no longer be organized on the basis of sex—or “sex-based stereotypes,” to use the current administration’s favored terminology. There has been an understandable outcry about the consequences of this, most obviously for women’s sports, where physical differences exert rather a significant influence. For example, women’s running, from the 100m to the marathon, will easily be dominated by men who identify as female. Worryingly, contact sports such
as women’s rugby will become very dangerous.

I am the faculty advisor to the women’s rugby team at Grove City College. Will it become illegal for me to refuse to allow the women to play opposite a team containing biological males who have rejected “sex-based stereotypes”? Whatever might be the legal case, I would consider it criminally irresponsible to allow such a match to take place.

What constitutes a person is now apparently nothing more than your feelings, your psychology. You feel you are a woman, despite what your body tells you? Then understand that your body has no authority here; go with your gut. Transgenderism is really just the latest, most radical expression of the notion that humans are just matter, the biology of which has no moral significance. The body has no intrinsic purpose, for it can be manipulated to serve those feelings in which we have come to invest decisive authority.

Any form of social organization that denies or challenges the identity of transgender people is by definition discriminating against them. It is not just women’s sports. It is anything that can be categorized as oppressive—be they religious organizations, traditional moral convictions, or previously unexceptionable pronouns.

Traditionally, the legitimate and the illegitimate could be distinguished on the basis of agreed-upon human ends, which all humans share and which transcend the individual. Once those ends have been abandoned in favor of personalized forms of individual happiness, an odd thing happens. With no consensus on what human beings are for, someone still has to make choices about which identities are legitimate and which are not. And thus the freedom of radical individualism ironically requires the authoritarianism of governmental decrees, with appropriate penalties
attached. [Carl R. Trueman, First Things, 1/26/21]

The UN Declaration of Human Rights recognizes that “all members of the human family” have “inherent dignity.” The UN also claims in Article 3: “Everyone has the right to life, liberty and security
of person.” In 1959 the UN adopted the Declaration of the Rights of the Child, and in 1989 reaffirmed it at its Convention on the Rights of the Child, declaring: “the child, by reason of his physical and mental immaturity, needs special safeguards and care, including appropriate legal protection, before as well as after birth.”

Since then the UN has reneged on these basic principles. “Worldwide, there were 73.3 million abortions each year between 2015-2019 according to [a] Lancet study. The injustice is beyond words! In our nation, there are 862,230 precious children—with what the UN once called “inherent dignity”—that are killed by the social injustice of abortion annually.” [Ryan Bomberger, Remember When the UN Declared Unborn Babies Should be Protected?, LifeNews.com, 11/20/20]

“The right to health, to home, to work, to family, to culture, is false and illusory if the right to life, the most basic and fundamental right and the condition for all other personal rights, is not defended with maximum determination.” Saint John Paul II, Christi Laici #38

The toys provided by parents deliver some of the earliest gender-based messages by encouraging children to engage in activities associated with, for example, dolls and trucks.

In the current study, we measured the influence of parental socialization by assessing 5-month-old and 12 1⁄2-month-old infants’ exposure to dolls and trucks and by experimentally manipulating parents’ encouragement to play with these toys. We found that infants displayed gender-typical toy preferences at 12 1⁄2 but not 5 months, a pattern characteristic of previous studies. Further, encouragement by a parent to play with toys from each category was ineffective in altering infants’ preferences. [John L.
Boe, Rebecca J. Woods, Parents’ Influence on Infants’ Gender-Typed Toy Preferences, Springer Science-Bus. Media, https://doi.org/10.1007/s11199-017-0858-4]

“I’ve Been Kicked Out of My Home”

[Ed.’s Note: There are literally tens of thousands of support agencies and homes to help pregnant women who have been rejected by their families. This is a brief report on one of them.]

Kelly, pregnant and 19, was abandoned by the father of her child & her entire family. She searched online for “homeless programs New York New Jersey” & Good Counsel Homes popped up. That evening she was in one of its four homes, welcomed by the manager with open arms and a warm smile.

“Good Counsel, homes for mothers and babies, started by the late Fr. Benedict Groeschel, CFR, and me back in 1985, is here to help any pregnant and parenting mothers ‘take the next good step’ as Fr. Benedict would say. That usually means going back to school or working or both. Good Counsel offers free babysitting for a mom during the year she is in the home in order for her to take those next good steps.”

“Good Counsel has served more than 7,800 mothers and children. Last year 30 babies were born from moms living in our homes as we kept the doors open in spite of the lockdowns.” [Christopher Bell,
www.GoodCounselHomes.org]

This free monthly newsletter is used by dozens of churches as a bulletin insert, and has had over 30,000 readers. To receive a copy in your inbox, email Frank Tinari, Ph.D. at tinarifr@shu.edu